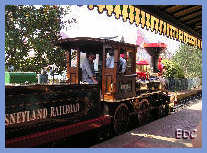 it was still nicely and busy in the park, because the most had still Easter holiday. We were around half past ten in the park and take as first the train. We could get in the train, only in the Main street. All other stations had been closed, however, you could get off there. We took all stations and got off on the Main street, which do we once in the time generally, because it is at the train always very busy.

Afterwards we will firstly obtain fast pass for the Big Thunder Mountain.

We came this time to see the Easter decoration. Those were there from  March 19 till  April 8. Now that was there. The topic was Alice in Wonderland with the white rabbit. Hereafter we went to eat we chose fried fish with  French fries at Todd’s hall. We looked for a place outside to eat it, deliciously in the sun. You walk Easter Village within and there were splendid large Easter eggs.

At 1 o'clock at noon, started  in the Fantasy festival Stage a show, Welcome to Wonderland, Celebrate with Alice, the crazy Mad Hatter and the White Rabbit the beginning of spring with songs and dancing.

After that we went to Easter Village. There could the children paint and color their chocolate eggs, in the work shop of the terrace Old Mill, before they eat the eggs. Also huge Easter Egg Hunt were done in the Alice Curious Labyrinth. At the terrace March her Refreshment, Mickey was been made from milk chocolate, you could taste chocolate also, which tasted moreover well. 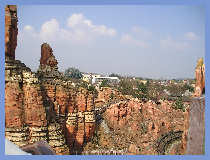 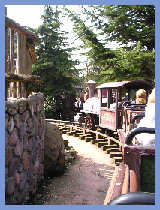 At two o'clock we could in the Thunder Railroad with the fast pass. In spite of our fast pass, we had to wait for a while. Here we have try to make also photos.

We returned to the camp-site, to get some more sun. We return the next day for the other park. Walt Disney studios.